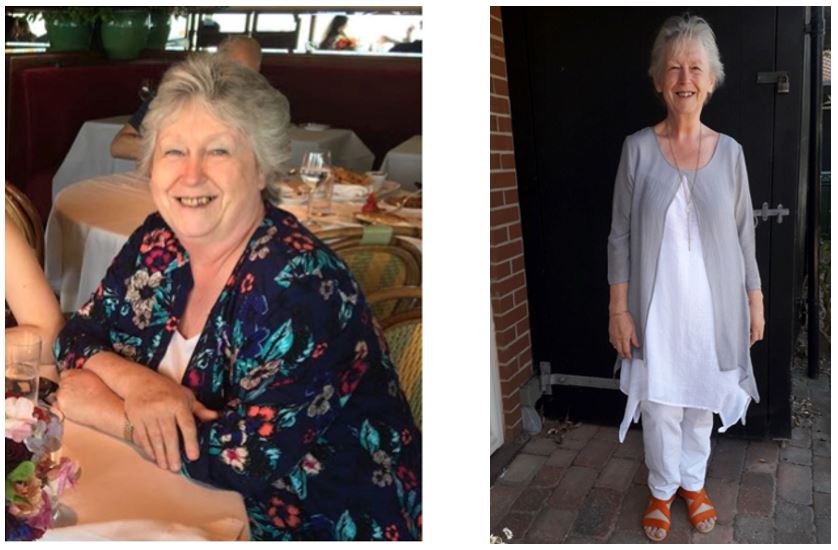 I am 66 years old and had been overweight my entire life; a fat baby, chubby toddler, plump adolescent and an overweight adult. On and off I had dieted and done a couple of periods of Weight Watchers. Each time losing a stone or so… before I lapsed and the weight crept up again.

About 10 years ago I was sent for a glucose tolerance test as a routine blood result showed raised glucose levels, but the test came back “normal”. Around the same time I heard a radio programme about healthy eating to avoid developing diabetes. The suggestion was to eat a low GI diet and from then on I made sure I ate my five a day (something I hadn’t bothered much about previously). I ate seeded bread, pasta, wholegrain cereals and avoided ready meals. I always made my own pasta sauce and on the whole followed the UK government’s Eatwell Guidelines. Ok, so I ate the odd pork pie and had an ice cream a couple of times a week, but I felt I had a fairly healthy diet.

In September 2017 I was diagnosed with type 2 diabetes, with a fasting glucose of 8.6 and Hba1c of 68. I was surprised, given my “healthy” diet, that my GP prescribed Metformin.

Over the previous few months I had seen TV programmes and read newspaper articles suggesting it was possible to reverse type 2 diabetes through diet, so I looked into it further and bought Michael Moseley’s book 8 Week Blood Sugar Diet.

800 calories a day sounded a bit drastic but for eight weeks I was determined to do it, in the hope it would indeed reverse my diagnosis. I decided not to take the Metformin, but instead solely change my way of eating.

By Christmas I had lost over three stone, going from 14 stone 2lbs to 11 stone. My Hba1c was 35, and my long-standing high triglycerides had reduced to such an extent that I was able to come off the medication I had been on for 25 years. And on top of this, I wasn’t hungry!

Since then, I have lost another stone in weight, have gone down a total of four dress sizes and now maintain my weight by following a LCHF (Low Carb, Healthy Fat) way of eating. Where previously I had never thrown out clothes that had become too big, because a little voice inside said (quite rightly) that sooner or later I might need them again, this time I knew I would never put the weight back on.

My diabetes is in full remission and I no longer worry whether I am going to lose a leg or my eyesight in the future. Above all, I really enjoy what I eat! Unlike standard “diets” where there is a sense of constant denial, with LCHF there are no such feelings; I just eat good quality real food.